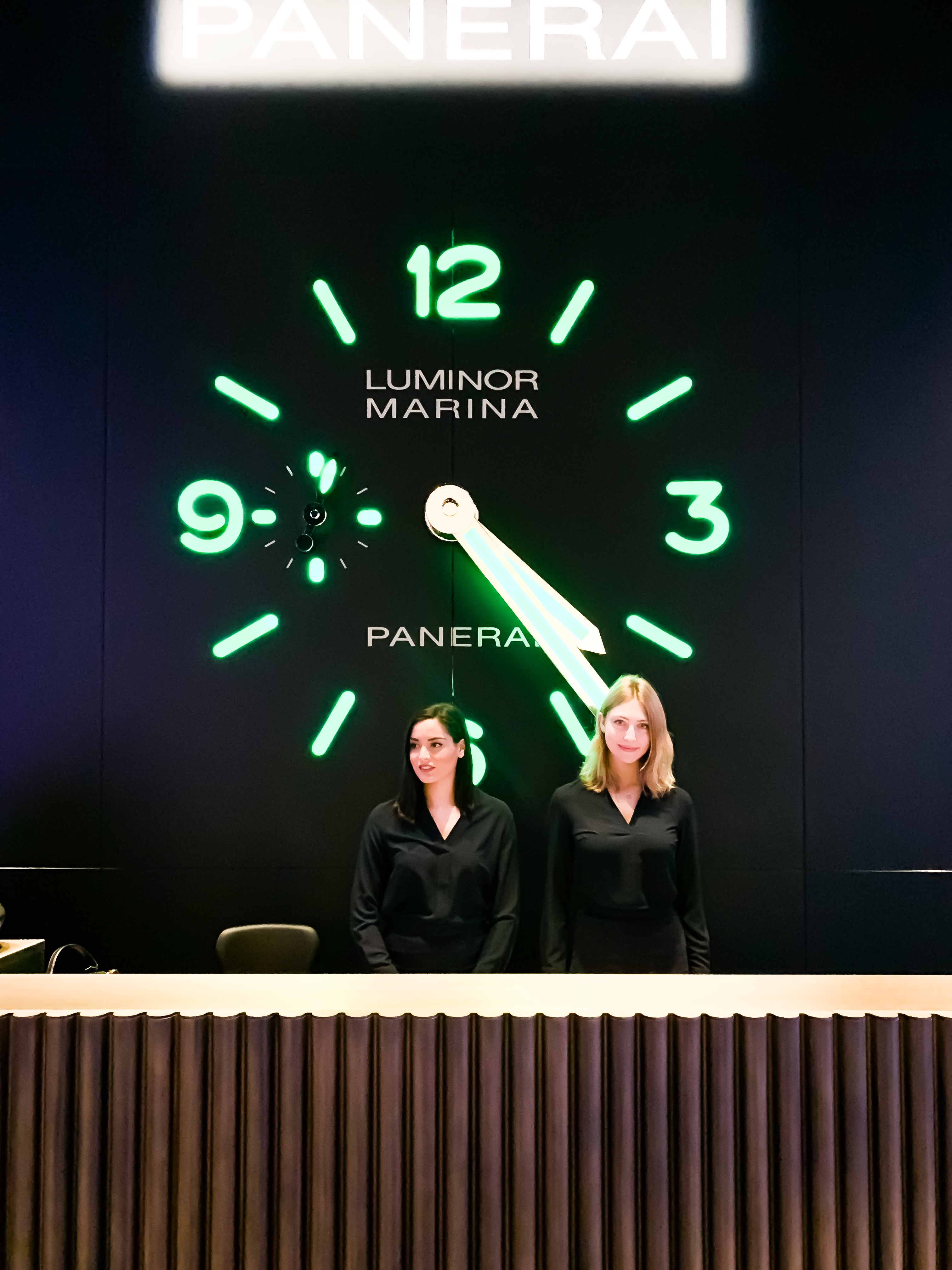 Life, as we know it, began from the seas four billion years ago. It is ironic that the ascent of life had to start from the deepest crevice. So, it is but natural that every human soul can listen to the voice of the sea. For Swiss luxury watch brand Panerai, water serves as a magnificent inspiration.  Small wonder then that Panerai took a dive into the myriad mix of sea and adventure to bring forth pearls from the depths of horology.

‘Vishawatch’ brings you glimpses from the recently concluded mega watch show SIHH 2019. We must admit, it was quite an experience to get a sneak peak into the mesmerising world of Panerai before the show officially opened to public i.e hours before the preview!

Lets begin with the ‘Submersible Chrono – Guillaume Néry’ edition which is a professional submersible watch and bears testament to the unflinching commitment to capturing the essence of the human dive.

Water resistant up to a depth of 300 meters, this 47 mm timeless masterpiece is equipped with a rotating bezel to calculate the duration of a dive. Not just connoisseurs, even you can truly appreciate the watch’s case engraved with the signature of the world champion and an image that recalls the boy-faced champion’s breathtaking record of a single dive depth of 126 meters with a lone breath! The collaboration between Panerai and Néry arose from the strong connection of characteristics they both share.

And you do not need to have the physical attributes of a French free-diving champion to wear it. In another significant move, the brand has introduced the petite 42 mm dial size making it a comfortable fit on lithe Indian wrists. If acquired, this watch can get you a free-diving experience led by Nery himself in Moorea, enraptured by the blue depths of Polynesia.

Betting big on its ‘Submersible’ range this year, Panerai has struck some interesting collaborations and created some breathtaking pieces with advanced materials and craftsmanship that were showcased at SIHH 2019. The ‘Submersible’, which was earlier part of the Radiomir collection, will henceforth a separate range.

Another model, PAM1039 The Luna Rosaa Challenger Submersible, is inspired by the technologies and materials used in sailing championships. The brand has joined hands with the iconic sailing team Luna Rossa. As the official sponsor of the team, Panerai will create a new collection of watches dedicated to Luna Rossa, which is the first to challenge the defender of the 36th America’s Cup. The new timepieces will be worn by the crew members of the team, led by Massimiliano “Max” Sirena (when they take part in the next regatta in 2021). Actual cloth pieces of the sails of the Luna Rossa have been used to create a very special texture on the dial. What a fascinating addition to story!

This one is also a diving watch i.e water-resistant to a depth of 300 metres (30 bar) with a case made of carbotech, the innovative light, shock resistant and corrosion free material based on carbon fibre. The striated matt black appearance of the case (47 mm) arises from the particular arrangement of the carbon fibres and it gives every watch a distinctive high tech and sporty look.

To say the least, we are a big fan of the carbotech material used in the watches makes them lighter, stronger and much more resistant to wear and tear as its non-corrosive nature ensures a royal experience even for everyday use. That’s not all. The unique properties of this material and the technique of putting it through the test of time makes every single watch unique in itself.

In another move to strengthen ties with its ambassador for more than 15 years, Mike Horn, the brand is offering a new edition. An accomplished sailor, world explorer and environmentalist, Horn and Panerai have shared a very special bond and excitement of his last four expeditions – Arktos, the North Pole Winter Expedition, Pangaea and Pole2Pole.

We hear that the new ‘Submersible Mike Horn Edition 47mm’ is a two watch collection that offers a distinctive take on the Submersible’s usual styling. And thats not all, one of them being very limited in production as it includes access to an Arctic expedition lead by Horn himself!

Another very interesting piece by the brand this year is the Radiomir 1940 Minute Repeater Carillon Tourbillon GMT Watch. Highly complicated, it features two of their brand new minute repeaters and it chimes.

Being touted as the most complicated Panerai watch ever made, it is distinguished by its rare mechanism, which can be set to chime either the local time or that of a second time zone. It is the product of four years of research and development and made entirely in-house.

The chiming mechanism is activated by a push-piece at 8 o’clock (above) and carried out by three hammers striking three gongs that are fixed to the movement and the case.

Priced at staggering 400,000 US Dollars, collectors will have to shell out more for any desired customisations.