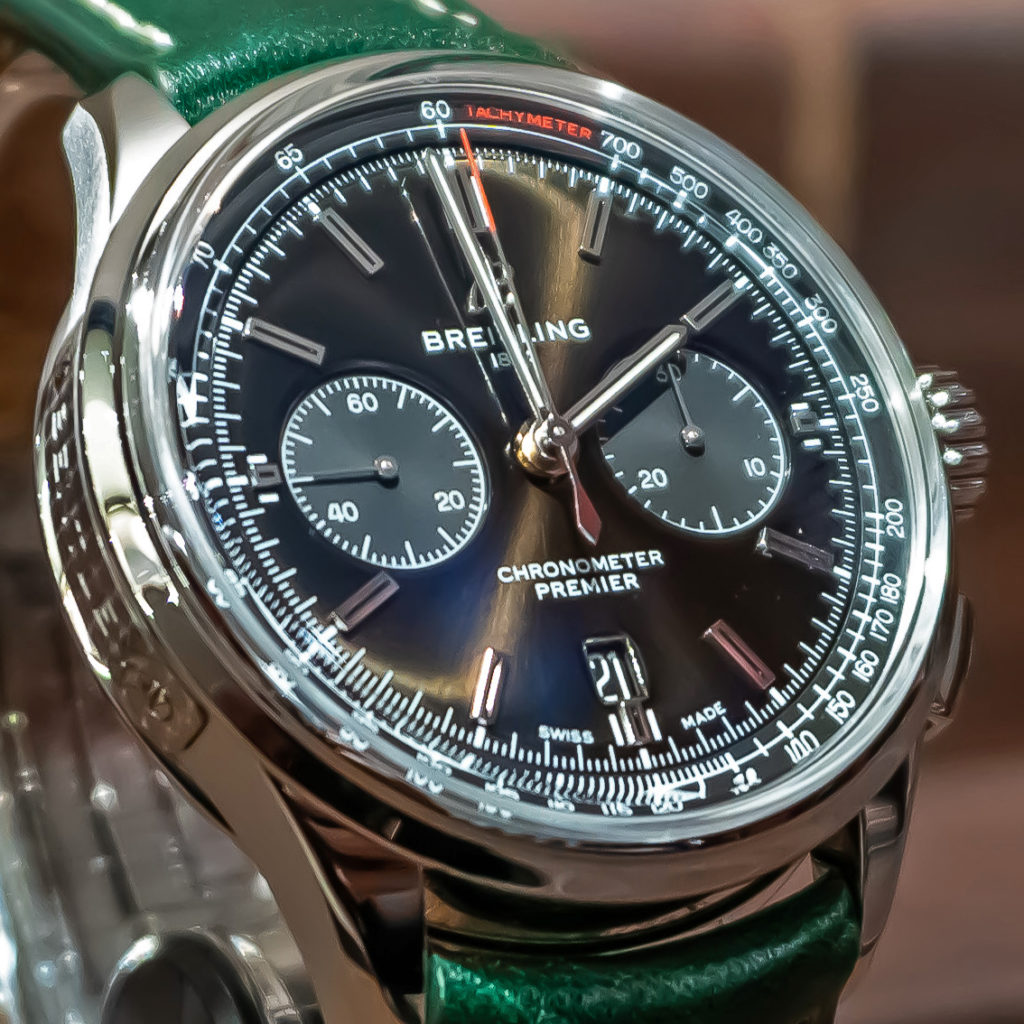 The ecstasy of donning one watch that reflects personalities of two iconic brands is sure to surpass usual thrills. Breitling’s Premier B01 Chronograph 42 Bentley is one such timepiece that has hit the shelves of luxury watch stores in India recently. With not more than a couple of pieces up for grabs at the moment, this one is a dashing looker. It is the first of the exclusive watches in the second chapter of the popular Breitling Bentley Partnership.

Featuring a British racing green 42 mm dial, this timepiece is decorated with contrasting black small seconds and 30-minute chronograph with Breitling’s very own B01 mechanical movement (with a 5-year warranty) and 70 hour power reserve.

Available in a seven-row stainless steel bracelet and green nubuck leather strap, it sports engraved plate design inspired by the dashboard of the historic supercharged 1929 “Blower” Bentley. The screwed-in sapphire crystal case-back protects it from water to 100 meters of depth. All this and more with a price tag of 8,500 USD or around Rs 6 lakh.

Breitling began dating Bentley in early 2000, when the British carmaker caused sensation among luxury automobile lovers by launching the Continental GT. The watchmaker’s expertise was roped in for designing technical instruments and the onboard clock. Since then, the two have been a pair and rolled out some exceptional designs. After more than 15 years, Breitling announced that it had renewed the partnership and would be introducing special Bentley editions in its core product offering, rather than in the separate ‘Breitling for Bentley’ collection.

A New Era For Breitling

Since the acquisition by CVC Capital in 2017, Breitling is run by Georges Kern, who was roped in as the CEO by the new stakeholder. Kern is ‘the man’ everyone in the watch industry has been talking about. Since taking charge he has turned around the fortunes of the company, according to observers who feel that he is repeating what he did for IWC. “His stamp on Brietling is very evident and it is working in favour of the brand” a Delhi-based retailer told ‘Vishawatch’.

Kern has been making strategic changes in the company, including cutting down the number of references, tweaking designs and focussing on fast growing markets like Asia. In his words, Kern has been trying to build a bridge between the vintage community of watch collectors “which is totally disconnected” from the current community of Breitling watch owners by rolling out modern timepieces inspired by the past and history of the watchmaker.

Traditionally, Breitling has been known for big pilot watches, but under new leadership, more elegant, stylish, classic and smaller versions are being crafted. In line with Kern’s vision, Breitling is aiming to be more affordable and inclusive in terms of pricing. Since Asian markets like Japan, China, Hong-Kong and Singapore are growing very well for the company, it is investing in retail expansion, marketing and new designs to lure watch lovers in the region. The brand is also finding new fans in Europe and America.