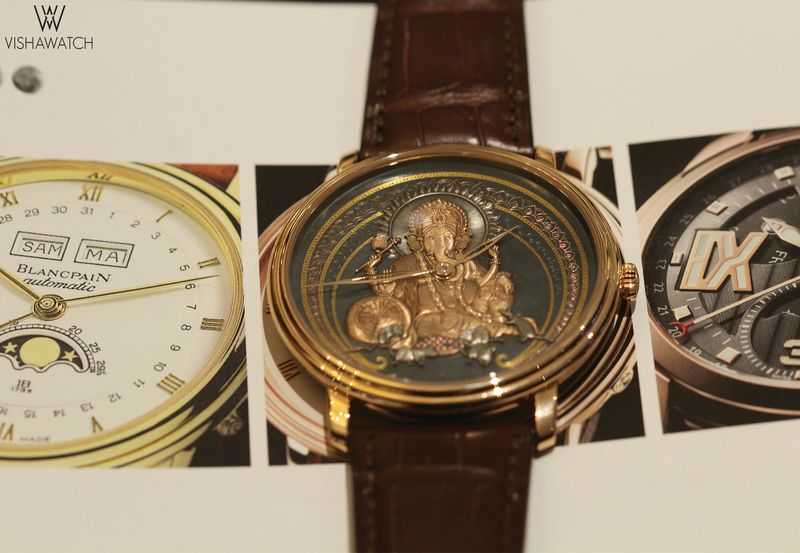 Born in Villeret in 1735 and anchored in tradition, nothing more can be said about Blancpain than already has. But when a limited edition piece (of which only three different models have been produced)
arrives in Delhi at Johnson Watch Company and we at Vishawatch have the opportunity of experiencing it soon after, we can’t help but pay homage to it.

Blancpain has, time and again, redefined watchmaking and pushed boundaries of the industry as a whole. It is the world’s oldest watchmaking brand, but its age has never made it either redundant or obsolete, quite the contrary actually.
To say that we were blown away, would be an understatement!

The Japanese art-form shakudō, which is not really a technique, but more a metal alloy (mostly copper with about 4-10% gold) and was traditionally used for sword fittings has been incorporated brilliantly by the Swiss watchmakers into this series. BLANCPAIN is renowned for its engraving and enamel painting workshops as well as their damascene timepieces, and the villeret shakudō collection bearing the image of Ganesha is a masterpiece to say the least. Every element of the metal alloys and engraving technique has been rendered with a natural ease and with extreme intricacy and finesse.
atch.com/features/sneak-peak-into-day-1-sihh-2018-geneva/”> 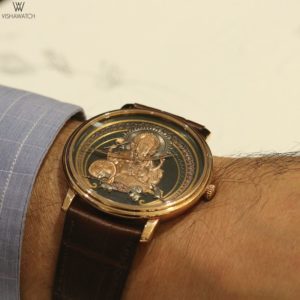 The beauty of this alloy lies in the fact that it can be treated to achieve a black patina, which in many ways looks like a lacquer and one which is important when engraving something with a rich level of detail and extreme visual contrast.
It also allows for crystal clear display and engraving of extremely fine detail in small spaces (now that explains the immaculate attention to detail by the watch brand)

The Blancpain Ganesha watch, is not just a marvelous example of their prowess as watchmakers but also a piece of art!

Lord Ganesha also known as Vinayaka (knowledgeable) & Vighneshwara (remover of obstacles) is widely revered as the patron of arts and sciences and the God of intellect and wisdom in the Hindu pantheon. As the god of beginnings, he is honored at the start of rites and ceremonies. The first of its kind was introduced in September 2016, coinciding with a festival of Ganesh Chaturthi.
The watch, a part of the villeret series, won the artistic crafts price in 2015 at the Grand Prix d’Horlogerie de Geneve. 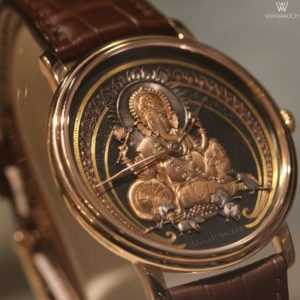 The new model of Blancpain’s Métiers art collection is crafted from a beautiful red gold. The warmth of the God sitting with one leg over the other, four arms and an elephant’s head inspires both respect and emotion. The sculpted green effigy of Ganesh takes pride of place in the heart of the inlaid Shakudō dial alongside his “vahana” or “mount”, the tiny rat Mushika. The dark patina glows blue to black depending on the light and is illuminated by yellow and bronze hues. Villeret’s signature hour and minutes burst from the bend in Ganesh’s trunk. The time functions are brought to life by a manual wind 15B caliber, which you can see through the sapphire back of the 45mm rose gold case. Price: 150,000 CHF